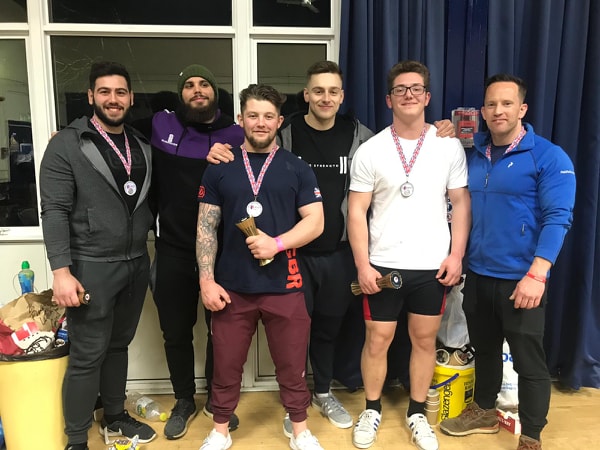 The Focus Athlete Series follows some of the talented members of Athlete Movement as they train and prepare for competition.

In Part Two of our series following Ed Crossley’s Powerlifting progress, Coach Ben updates us on a huge few weeks for Ed.

So, you read the first blog about our Focus Athlete Ed Crossley and have come back to see how he has done!

Since the introduction, Ed has competed at both British Bench Press Championships and Athlete Movement’s  StrengthFest. He did extremely well in both competitions so here is a little recap of his performances and hopefully you can pick up some tips and tricks on the way!

This was Ed’s second National Championships so he is no stranger to being on the platform at a high level but this does not make it any less intimidating! I told Ed to relax when he arrived and to get some food in before his weigh-in (he was nowhere near filled out in the 105kg weight class so had lots of room to spare).

Once weighed in, there was a very long wait before Ed started lifting due the number of competitors. This is an important time as a lifter where you need to relax a bit, know that the work is done and that you will be on the platform soon as it easy to start lifting too early and putting yourself in a bad position for an optimal performance.

Luckily, lots of other members of the Powerlifting Coaching Team Ed is part of, Team Shedside, were competing or there to spectate, so Ed had some good support and enough communication about what was happening and when. He made sure not to rush his mobility routine and warmups so that he had enough time to execute the plan we had carefully put together for the day.

Powerlifting is one of those sports where you need the variables to come together for you to lift your best, but Ed had kept his cool, listened to me and before he knew it was with me in the platform holding area about to step out for his opening attempt. His first attempt was a very easy 135kg – something your opener should always be. The aim is to choose a weight you can lift to competition standard routinely, with little to no struggle. This builds confidence for your next two attempts and sets the tone to not only yourself but also your competitors, who are more than often closely looking.

We jumped to 145kg for the second attempt because the first one flew. This weight would be a competition personal best for Ed, but something he had pressed easily in the gym only a few days prior, so we were both very confident. It went up easily and we put in 150kg for his last attempt. Despite there maybe being more than an extra 5kg in the tank, we knew this was a sensible final attempt which Ed could confidently press following his first two lifts. This lift would secure Ed the gold medal, increase his own national record and be a huge personal best.

Ed pressed it with similar speed to his opener having taking his time to get his setup right, locking his elbows firmly and getting the calls from the referees with no delay. A great success!

Only a week later and we had a quick turnaround in Ed’s training for StrengthFest, our own home event consisting of an Olympic Weightlifting competition, a Powerlifting Competition and finishing with a Log Press challenge. The day was fantastic and ran extremely well, with a real buzz in the crowd and lots of support from everyone.

Ed had entered the Powerlifting and Log Press and was gunning for the big numbers in both. He had struggled with some elbow issues last competition prep (whilst getting into the low bar position for the squat) so we had made some adjustments to allow him to train pain-free and efficiently but it did mean having next to no regular squat training to base his attempts off. Modifications can always be made to your training in order to still train in a way that gets you closer to your current goals!

Once again, some other Team Shedside members were competing alongside Ed so he had some help and support from them as well as a smoothly run event and large, atmospheric audience – it was a perfect setup for some big numbers and personal bests. Squats went to plan, ending on 215kg for an all-time personal best. Not much else to say, it was a manageable and clean lift with some room in the tank too! We were both happy as squats were the unknown territory on the day.

Moving into Bench Press, Ed had set himself up with 3 successful attempts in the Squats. As I mentioned earlier, securing these attempts is overlooked as it helps build confidence as well as your total. Sometimes it’s wise to be more strategic about your attempts when competing and not just chase after the personal bests. With that being said, our full intention with bench press was to push for a personal best as we knew there was more in the tank after the week before.

Choosing the same attempts as British Bench, Ed opened with 135kg which he pressed with ease. Straight to 145kg which again moved routinely so, after his performance at British Bench Press, Ed was extremely motivated to take the jump to a huge 155kg, which would secure a 5kg all-time personal best. I knew he was confident, so I allowed him to put it on the bar. Ed got amped up backstage and came out to the platform with a big buzz from the crowd. He setup carefully as usual, un-racking the bar carefully, received a quick call from the head referee, sunk it down and drove it back up having to fight hard through the middle to lock it out but it came up! Unfortunately due to a technical error (his bum lifting off the bench), the two side refs gave Ed red lights meaning it was a no lift despite him pressing it with relative ease. It was definitely a big shame, and Ed was gutted as he had pressed it, but he screwed his head back on and went to get in the zone for deadlifts.

Deadlift time; the lift that gets the crowd going and the last lift of the Powerlifting competition. Ed opened on a speedy 200kg, allowing us to take a strategic jump to 215kg which again moved silky, like Ed’s favourite Jersey milk. This allowed us to go for an all-time personal best of 230kg. Ed had worked hard to get his deadlift technique better and we had a strong prep for them, progressing some different variations and keeping them; it was time to put all that hard work together for this final attempt.

Up it went! A successful day for the lower body lifts and an unfortunate slight error for bench press, but nevertheless landing Ed on 8/9 attempts, a 590kg total (15kg competition personal best) and had he got a good lift on his last bench this total would have been bumped up to the big 600kg – a massive achievement and one very proud coach!

After shovelling in a load more calories, Ed moved onto the Log Press event, where he was going to utilise any energy he had left to pick up giant log with handles and hopefully lock it out above his head. I had allowed him to practice this event in the lead up to both these competitions so that we was not a complete stranger to it. The log press requires a lot of upper back, core and shoulder strength in order to stabilise it and then get it moving to press it overhead. Ed managed to get up to 80kg on the log press, which was a great effort after a full day of lifting!

Overall, our Focus Athlete did extremely well in these two close together competitions, displaying some excellent strength which is a result of his hard work, consistency and dedication!

Next is the wait to see if Ed will be selected for the World Bench Press Championships in Tokyo!

The last comment and 2 other comment(s) need to be approved.